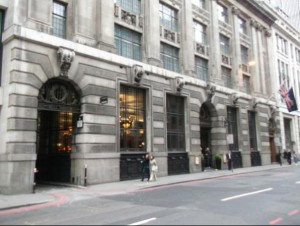 Wetherspoon’s real ale festival – https://www.jdwetherspoon.com/real-ale-festival –  (the “World’s Biggest” according to them) looks like another perfect opportunity to enjoy a few drinks in the grand surroundings of The Crosse Keys, 9 Gracechurch St., EC3V 0DR – https://www.jdwetherspoon.com/pubs/all-pubs/england/london/the-crosse-keys-city-of-london – once the London headquarters of the Hong Kong and Shanghai Banking Corporation.

They will be showing the France v. England 6 Nations Rugby international from 8pm, but it’s a huge pub and there’s easily enough space to accommodate both those who want to watch it and those who would rather avoid it!

The Crosse Keys is just a few minutes walk from Monument underground station, which is at the bottom end of Gracechurch St., but please note that there is no Circle Line service on 19th March. The District Line is operating as far east as Tower Hill, so you can get to Monument from the west but you can’t get there from the east (unless you are only coming from Tower Hill).

Another option is Bank (Central & Northern lines and DLR). Take exit 6, walk straight down Lombard St. and turn left when you reach Gracechurch St., which is the last major road before you get to the “Walkie-Talkie”.

The Crosse Keys closes at 11pm but The Folly, 41 Gracechurch St., EC3V 0BT – http://www.thefollybar.co.uk – is open until at least midnight and is on the way back to Monument station.