This pub crawl takes us down the eastern side of Soho, starting at The Flying Horse, 6 Oxford Street, W1D 1AN – https://www.nicholsonspubs.co.uk/restaurants/london/theflyinghorseoxfordstreetlondon – a Grade II* listed building with an ornate interior featuring paintings by Felix De Jong, the leading decorative artist of the music hall era, and now the last remaining pub on Oxford Street.

The Flying Horse is on the north side of Oxford Street, directly opposite Tottenham Court Road underground station – take Exit 1 for Oxford Street (south side). Strictly speaking, this puts it in Fitzrovia, but it’s a very convenient meeting point before we head south into Soho. 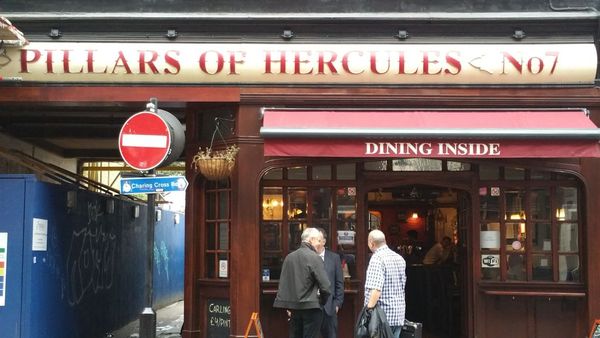 The Pillars of Hercules is an independently-owned free house. Building work next door meant that the photograph I took is not especially flattering, but once inside I found both the staff and the surroundings to be particularly convivial.

The Grade II Coach & Horses is something of a Soho institution, once famous for hosting Private Eye editorial meetings and for having London’s “rudest landlord”, amongst other things.  It’s now owned by Fuller’s but run more like a free house. We should arrive in time to catch the last hour or so of the Saturday night sing-along – http://coachsoho.co.uk/sing-along. 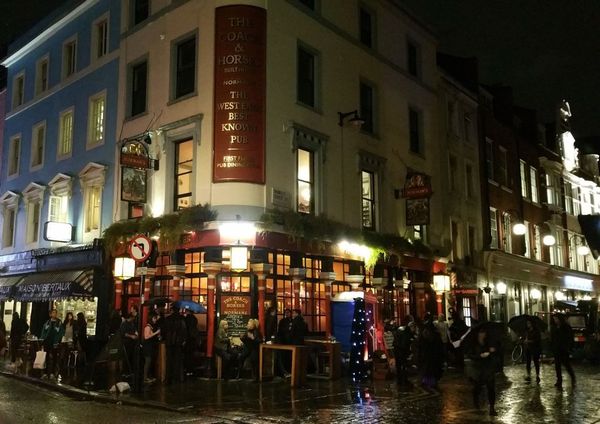 As ever we may need to do things differently on the night, possibly more so than normal because this is a busy area at the best of times.

Other pubs near The Coach & Horses include The Three Greyhounds, 25 Greek Street, W1D 5DD – https://www.nicholsonspubs.co.uk/restaurants/london/thethreegreyhoundssoholondon – and The Cambridge, 93 Charing Cross Road, WC2H 0DP – https://www.nicholsonspubs.co.uk/restaurants/london/thecambridgecambridgecircuslondon, so we may well end up in one of those.